Do you know where is Stratford Connecticut in USA? 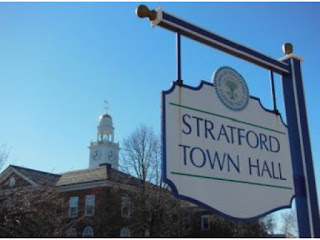 Do you know where is Stratford Connecticut?

Stratford is a town in Fairfield County, Connecticut, United States. It is situated on Long Island Sound at the mouth of the Housatonic River. Stratford is in the Bridgeport-Stamford-Norwalk Metropolitan Statistical Area.

" Founded in 1639, Stratford is a community rich in history, and abundant natural beauty.
Interactive map & directionsSituated on Long Island Sound, and bounded to the east by the Housatonic River, Stratford has long viewed its waterfront as an important natural resource. The Town's location on Long Island Sound affords residents and visitors alike with two public bathing beaches, five marinas, several fishing piers and two public boat-launching facilities.Within an hour's drive of New York City, Stratford is the easternmost town in Fairfield County-Connecticut's Gold Coast. Major highways such as I-95, Route 8/25 and the Merritt Parkway bisect Stratford, and provide convenient access to the entire Northeast corridor. The deep water harbor of neighboring Bridgeport provide excellent docking and terminal facilities for either domestic or overseas shipping, in addition to ferry passenger service to Long Island. Sikorsky Memorial Airport, located in the Lordship section of Stratford, remains a hub of corporate activity and provides commuter service to other cities in the northeast. Rail service provided by Metro North with connections to Amtrak further round out an excellent array of transportation choices.

Stratford has a long association with the aviation industry. Stratford became the birthplace of the American helicopter industry, when in 1939, a Russian immigrant, Igor Sikorsky, successfully flew the first helicopter at his Stratford-based aircraft plant. More than a half-century later, Sikorsky Aircraft, the world's leading helicopter manufacturer, still designs and produces state-of-the art helicopters for both military and commercial applications at its sprawling manufacturing facility on Stratford's north side. Drawn by a highly skilled and productive work force, excellent access to transportation, and a large inventory of affordable housing, it's no surprise that many businesses have chosen to call Stratford home.The diversity of Stratford's natural resources is as rich as its cultural heritage, ranging from the 250-acre, town-owned Roosevelt Forest to the Great Meadows Salt Marsh, one of the largest unditched salt marshes remaining in New England and now a portion of the Stewart B. McKinney National Wildlife Refuge. Stratford is host to a variety of cultural attractions as well, including the soon to be revitalized Shakespeare Theatre and Boothe Memorial Park, a municipally-owned park and museum showcasing an assortment of architecturally-unique structures and vast collection of Americana."

Posted by NSA Limousine at 5:14 AM